The jobless rate fell to 4.8% in the same period, while the number of people in work went up by 49,000, said the Office for National Statistics (ONS).

The Bank of England has forecast that unemployment is set to rise amid uncertainty over Brexit.

However, the ONS said the latest figures brought the unemployment rate to its lowest level since the three months to September 2005.

The total number of people in jobs remained at a record high of 31.8 million, the figures showed.

ONS statistician David Freeman said: “Unemployment is at its lowest for more than 10 years and the employment rate remains at a record high. Nonetheless, there are signs that the labour market might be cooling, with employment growth slowing.” 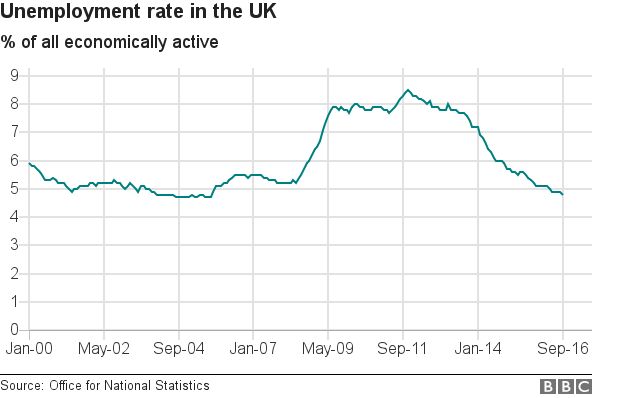 Analysts also noted that the pace of jobs growth was slowing and attributed this to the effects of the UK’s vote to leave the EU.

“The Leave vote is starting to sap the jobs recovery of its previous strength,” said Ruth Gregory, UK economist at Capital Economics.

The British Chambers of Commerce said Brexit was “dampening firms’ recruitment intentions” and that this would put “increased pressure on UK employment levels”.

“These subdued labour market and economic conditions are also expected to keep a lid on wage growth over the next year, despite higher than expected levels of inflation,” said BCC head of economics Suren Thiru.

The BCC called on Chancellor Philip Hammond to include measures in his Autumn Statement next week that would “support firms looking to recruit and invest in their workforce, including measures to boost investment and lower upfront business costs”.

Meanwhile, the number of people claiming unemployment benefits in October increased by 9,800, the biggest rise since May, the ONS said.

The employment figures are based on the Labour Force Survey, in which the ONS speaks to about 40,000 households once every three months.

That is a very large survey, but it still means the figures are not precise.