Nissan has confirmed it will build both the new Qashqai and the X-Trail SUV at its Sunderland plant following government “support and assurances”.

The Japanese company’s commitment to Britain’s biggest car plant had been in doubt following the EU referendum.

Labour leader Jeremy Corbyn said the government must make public any deals struck with the firm.

However, Business Secretary Greg Clark said there was “no question of financial compensation” for Nissan.

The company’s decision comes as economic growth in the three months after the Brexit vote confounded expectations, increasing by 0.5% – slower than the 0.7% in the previous quarter but higher than analysts’ estimates of about 0.3%.

Nissan’s decision is the first major development for the car industry since the Brexit vote and secures 7,000 jobs.

“The support and assurances of the UK government enabled us to decide that the next-generation Qashqai and X-Trail will be produced at Sunderland,” said Carlos Ghosn, Nissan’s chief executive, adding that he welcomed Prime Minister Theresa May’s “commitment to the automotive industry in Britain”.

Last month, he warned that Nissan might not invest in the Sunderland plant unless the government guaranteed compensation for costs related to any new trade tariffs resulting from Brexit.

Mrs May described the announcement as “fantastic news”, adding: “This vote of confidence shows Britain is open for business.” 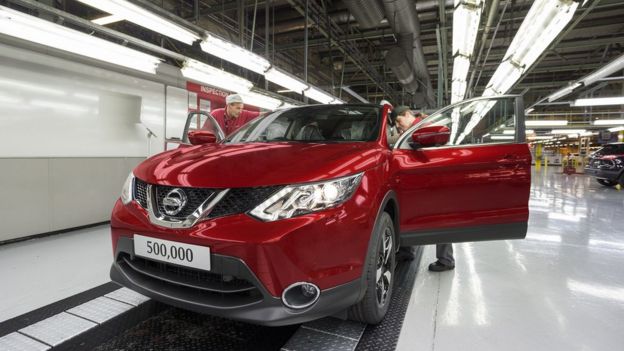 Mr Clark said: “The fact Nissan have not only made a long-term commitment to build the next generation Qashqai and X-Trail at Sunderland, but decided to upgrade their factory to a super-plant, manufacturing over 600,000 cars a year, is proof of the strength of the sector.”

A Nissan spokesman said making the X-Trail at Sunderland could lead to hundreds of new jobs being created in the coming years. It will be the first time the model has been made outside Japan.

The production line was stopped at 11am on Thursday so workers could be told about the decision.

“We would expect nothing for us that the rest of the industry wouldn’t be able to have access to. We see this as a whole industry thing, not a Nissan thing.”

We don’t know the details of the “support and assurance” that Nissan extracted from the UK government. But it was clearly enough to secure a commitment from Nissan to build not one, but two new cars at the Sunderland plant.

The promise to shield Nissan from the impact of Brexit will not be lost on rival manufacturers, both those already in the UK as well as those that might be tempted to come.

Will other carmakers with big investment decisions to make now favour Britain? It’s possible – but now only after securing a few government guarantees.

The UK car industry has been vocal in warning about the impact of an exit from the single market.

Although the cheaper pound makes their exports more attractive, a hard Brexit and the prospect of trade tariffs will add to their costs.

It seems likely that the government has now promised some sort of financial support to cushion Nissan against such an impact. That will be controversial, of course. But once outside the EU, it won’t necessarily be illegal.

Building the X-Trail SUV is an unexpected addition to the model line-up at Sunderland, which makes almost one in three cars built in Britain and produced 475,000 vehicles last year – 80% of which were exported.

The Sunderland plant opened in 1986 and has produced almost nine million cars over the past three decades.