Government borrowing fell by more than expected to £4.8bn in October, thanks to a record amount of tax income for that month, official figures show.

The amount borrowed was £1.6bn lower than for the same month last year.

From April to October, the financial year to date, borrowing, excluding state-owned banks, fell by £5.6bn to £48.6bn, the lowest for the first seven months of a tax year since 2008.

The figures come a day ahead of the Autumn Statement on Wednesday.

Economists had expected borrowing to come in at £6bn last month.

Overall tax income in October was the highest since records began, driven in part by a 23.6% jump in corporation tax receipts.

Despite the monthly improvement, on Wednesday the Chancellor, Philip Hammond, is expected to announce an extra £100bn of public borrowing for the next five years, compared with what was planned in March, largely because the economy is expected to grow less quickly than had been thought.

Public sector net debt – excluding the taxpayer-backed banks – was £1.6 trillion, equivalent to 83.8% of GDP and an increase of £50.9bn compared to October last year. 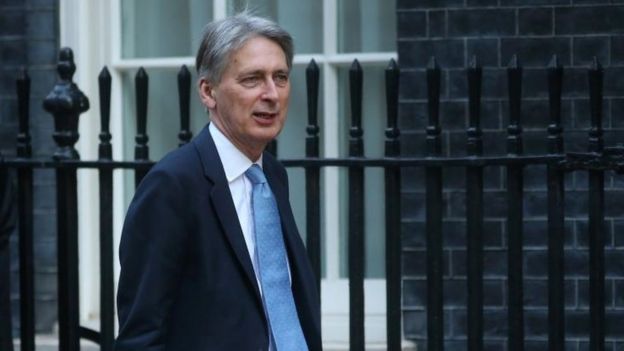 Mr Hammond has already indicated that he will “reset” the UK’s post-Brexit economic policy away from his predecessor George Osborne’s aim of taking the government from a deficit to a surplus by 2020.

Instead, he plans to put more investment into areas such as infrastructure.

Despite October’s improvement, Samuel Tombs, of Pantheon Macroeconomics, says it doesn’t compensate for the weak start to the year: “The higher-than-expected starting point for borrowing this year and weaker projections for GDP growth will compel the OBR to revise up sharply its forecast for borrowing in future years.

“The chancellor’s warning at the weekend that he is ‘highly constrained’ suggests that there will be few sweeteners for the ‘JAMs’—people ‘just about managing’—in tomorrow’s Autumn Statement.”

British Chambers of Commerce (BCC) head of economics Suren Thiru also said the size of the UK’s budget deficit could limit the scope for growth-boosting measures in the Autumn Statement.

“The chancellor faces a major fiscal headache over the next few years, with slower than expected growth likely to further restrict the UK’s ability to generate sufficient tax revenue and achieve a substantial reduction in the deficit.

“It is therefore essential that the chancellor’s new fiscal plan is flexible enough to adapt to changing economic conditions. The government must make a distinction between borrowing to cover the deficit and borrowing to invest, particularly in infrastructure, which will boost the economy’s tax generating potential in the long-term,” he added.