Online retail giant Amazon has said it will create 5,000 new full-time jobs in the UK this year.

The firm said it was looking for a range of staff including software developers and warehouse staff.

There will be jobs at Amazon’s head office in London, as well as in the Edinburgh customer service centre and in three new warehouses.

The recruitment will take Amazon’s workforce in the UK to more than 24,000.

Doug Gurr, the head of Amazon’s UK business, said: “We are creating thousands of new UK jobs including hundreds of apprenticeship opportunities as we continue to innovate for our customers and provide them with even faster delivery, more selection and better value.”

The company is opening three new warehouses, or what it calls “fulfilment centres”, in Tilbury, Doncaster and Daventry.

The extra warehouse space will be used to cope with existing growth and to speed-up deliveries.

It will also handle deliveries for third-party retailers, who sell through Amazon’s website and use Amazon for deliveries.

Growth in those third-party sellers has been particularly rapid. 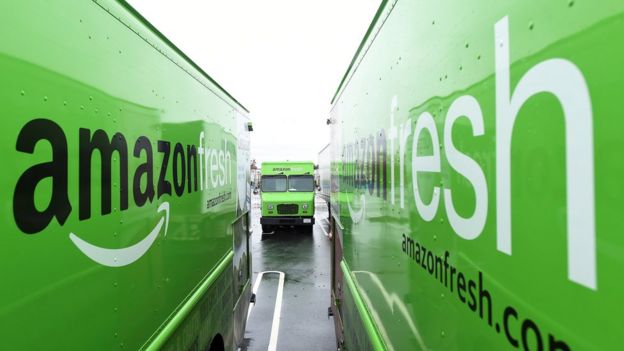 The expansion reflects the importance of the UK market, which is Amazon’s second biggest outside the US, behind Germany.

Services which are developed in the US are usually launched in the UK first, such as Amazon Fresh, the grocery service which was launched in parts of the UK last summer.

As well as expanding in groceries, Amazon is also pushing into fashion, says Natalie Berg, retail analyst at Planet Retail.

Clothes sales are already one of its fastest growing areas and it has been reported that Amazon is close to launching its own-brand fashion label.

That rumour has been fuelled by Amazon’s creation of a fashion photography studio in London’s Shoreditch.

“If you are a grocer or fashion retailer, Amazon is keeping you up at night,” said Ms Berg.

Last year Amazon had to defend its employment practices after a BBC reporter, working undercover at an agency which was contracted by Amazon to deliver parcels, spoke to drivers who claimed they worked illegally long hours and were expected to deliver up to 200 parcels a day.

Amazon said it was committed to ensuring drivers drive safely and legally, and are “fairly compensated”.