The employers group, the CBI, is calling on the government to abandon an immigration target which was set by David Cameron and which then proved part of his undoing.

Given that it’s pretty hard to control the number of people leaving, it’s arguably a dangerous thing on which to pin your political career.

But that’s what the former prime minister did when he pledged to get the number down to the “tens of thousands” from over 300,000 a year.

David Cameron failed, and unease about the number of people arriving from the EU was the defining issue of the referendum.

The message was clear: without control of our borders we have no chance of ever controlling net migration. The rest is now history.

The CBI needs to acknowledge public concern over immigration while at the same time warning about looming labour shortages in key industries like agriculture, care and construction.

Its answer – abandon the net migration target in favour of a more nuanced measure.

The CBI favours one which recognises the challenges faced by these industries and also reflects the public’s differing attitudes towards certain jobs.

In its report, the CBI argues that, although polling after the referendum showed that the public looks on unskilled migration unfavourably, when asked about care workers and construction workers, 75% and 60% respectively said that the numbers of migrants should stay the same or be increased.

That, says the CBI, is evidence that we need a better way of measuring the cost and benefits of immigration.

In one sense, the CBI has a strong case.

Unemployment is at an 11-year low of 4.8% and there are a record number of people currently in a job.

There’s little evidence that immigration has pushed UK nationals out of a job. 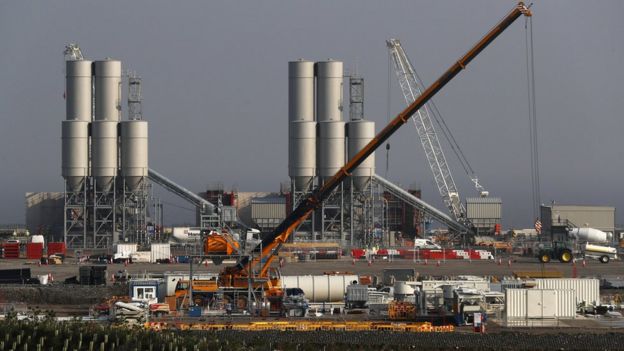 And without the EU nationals already here, many industries would face crippling labour shortages.

The CBI also insists that immigration has had little impact on wages, particularly in low-skilled areas.

But privately, many bosses acknowledge that immigrants, who often sleep several to a room, and often leave their families back in Eastern Europe, are prepared to work for lower wages.

And that depresses wages at the bottom of the pay scale.

A Bank of England study found that although small, there was a “statistically significant” negative impact on wages in some unskilled occupations which had high concentrations of immigrant workers.

The impact may be small, but it plays big when amplified by other social concerns.

The CBI raises some very real challenges facing UK businesses and the economy as a whole.

There are serious questions about who will build Hinkley C nuclear power station, an expanded Heathrow airport, the HS2 railway project, and hundreds of thousands of new homes.

An ageing population will need more carers, and turnips don’t pick themselves.

The government has been making some conciliatory noises.

Speaking to business leaders in Cardiff, Brexit Secretary David Davis said that while freedom of movement will end in its current form, the government does not want to end up with damaging labour shortages in key areas.

That raises the potential for work permits or visas to be issued on a sector-by-sector basis, as required by particular industries.

If that need increases, the government may be in a position where it has “retaken control”, only for immigration to stay stubbornly high.

It may want to abandon the net migration target, but it knows that reducing it was one of the messages that the public really heard during the referendum campaign.

Given that, the CBI’s plea may fall, at least for now, on deaf ears.